You are here : HOME > NEWS > Royal approval for Tivoli GreenCity 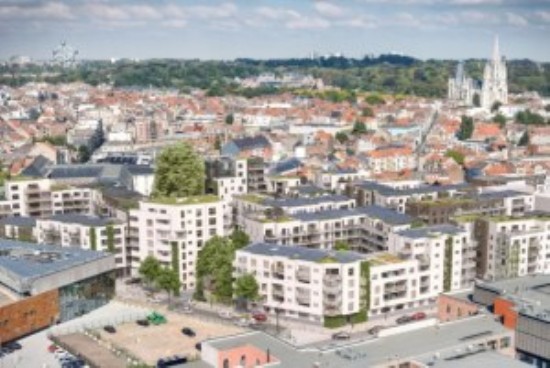 It is not uncommon for real estate projects to be sufficiently important to attract personalities such as mayors, regional ministers or even federal ministers to their inauguration. The project which was inaugurated this week  citydevs Tivoli GreenCity  is sufficiently important to have attracted King Philippe I. Also present were Brussels Region Minister-President Rudi Vervoort, Brussels City Mayor Philippe Close and minister Céline Fremault.

The project is a vast city district extending to over 55,000 m², comprising the 8,300 m² Greenbizz company incubator and FabLab, more than 400 residential units two crèches, retail units and a 2,000 m² park. Some of the environmentally-friendly aspects of the project include common laundry rooms with 100%.water recycling, rooftop gardens, an experimental greenhouse facility Where water is concerned, there is also rainwater collection and the objective is to have the whole site at 0% waste. For waste collection, underground waste bins are locate within 50 metres of each building, so that there is no necessity for waste bins on the streets. And in terms of mobility, 700 bicycle parking spots are included, along with parking points for shared cars. Cars will not be able to traverse the site, which therefore remains pedestrian and bike-friendly. The layout will be very open, with visibility to the interior of the buildings, and a great deal of green space.

Speaking to the press, citydev CEO Benjamin Cadranel said that what makes Tivoli GreenCity unique in terms of an eco-district, not just in Belgium but overall, is the fact that it is located close to a city centre and not outside, somewhere near a train or tram station. He also pointed out that this project forms a pivotal point between the industries of the canal side just a few hundred metres away, the popular district of Bockstael, Tour & Taxis

Moving back to the activities in GreenBizz, Benjamin Cadranel pointed out that all of the companies are undertaking sustainable projects. He also repeated that it is extremely necessary to have industrial activity within a city.

And finally, underlining the city district character of the project, the King was still there to see the beginning of the district fête which took place in one of the central squares of Tivoli GreenCity.