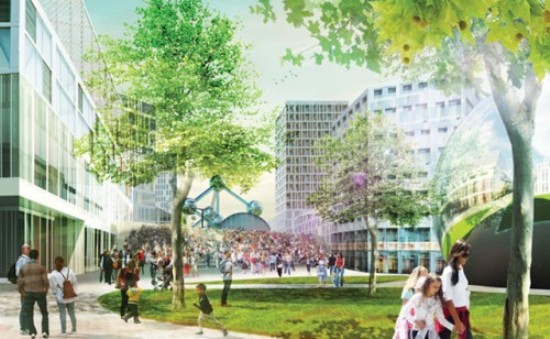 The hottest proposed shopping centre development is doubtless Neo, the enormous project set to transform the Heysel plateau to the north of Brussels. Dutch architectural bureau KCAP, which won the competition to redesign this area, is exhibiting Neo at Mapic, and the latest press release from the bureau states something of what is at stake: This requires a strong vision that integrates Brussels, Belgium and Europe in one place, The site, approximately 68 acres in size, will develop into a mixed urban program, including an international conference center, a regional shopping center, a museum, leisure functions, housing and a park. With an investment of 900 million Euros, it is Belgium's largest mixed urban redevelopment. The masterplan allows for the phasing of built program, public space and infrastructure. Phase 1 is expected to start from 2014 with the construction of the retail centre. The completion of the entire plan is expected around 2025. Brussels Minister-President Charles Picqué, accompanied by trade minister Benoît Cerexhe and Brussels Mayor Freddy Thielemans is also in Cannes, and taking part in explaining this often controversial project to Belgian visitors to Mapic. Project CEOs Paul Delesenne and Henri Dinneur are also at Mapic, as is Frank Werner, representing KCAP.