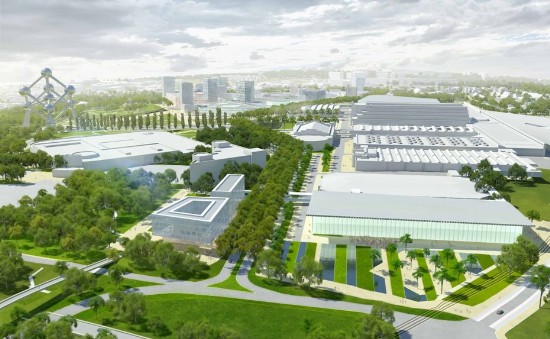 The master-plan is comprehensive (image: KCAP)

The ongoing saga of the Heyzel plateau redevelopment, under the name of Neo, has taken another step. Just a few days ago, the City of Brussels authorities launched a new phase by setting in motion the procedure for the two main procurement contracts. This follows the decision last year to appoint a master planner for the site, the chosen bureau being KCAP (Kees Christiaanse) of the Netherlands, and the further step earlier this year of modifying the Brussels Ground Use Plan or PRAS. The city authorities seem to be aiming to give a signal to would-be stakeholders that Neo is now reaching a decisive stage in its pre-construction phase.

The basic concept behind Neo is turn a vast and somewhat incoherent tract of land on the northern periphery of Brussels into a new mixed use development. Amongst the main pillars of the citys desire  and thus of the master plan  is a 5,000-seater conference hall. It has long been regretted that this type of venue, to be found in numerous major cities across Europe, does not exist in the European capital. Alongside the conference centre and its allied facilities, a hotel complex is (naturally) planned, and there is set to be a substantial quantity of housing. A recreation and leisure hub with sports and tourist facilities, represents a further element. None of this is particularly controversial.

However, it is the last element, and in many ways the most iconic element, which has up to now caused the most controversy. This is a 72,000 m² shopping centre  to put the size into perspective, this equates to around fifty floors of a large office building. The controversy involves a nearby project  Uplace in Machelen  which is also proving difficult to get underway, and which is largely a shopping centre development. Does this part of the city need two new centres, and if not, which one? Adding to the complexity is the fact that Neo is in the Brussels Region while Uplace is in Flanders Lastly, although the iconic Atomium which sits on the Heyzel plateau will obviously be untouched, the fate of one of Belgiums other major tourist attractions, Mini-Europe with its accompanying shops, restaurants and cinemas, and which is in the shadow of the Atomium, is much less clear. The owners say the city will forcibly close it, the city says it wont