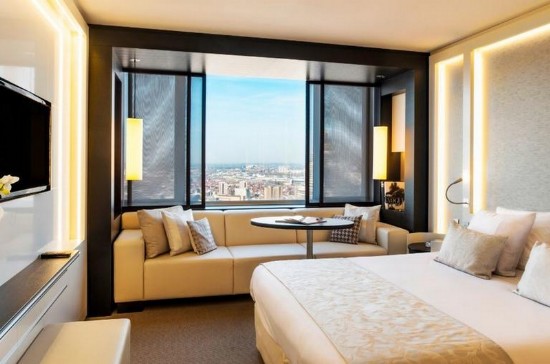 In a new Marketbeat report, broker and real estate advisor Cushman & Wakefield has been looking at the Belgian hotel market. First of all it finds that the Belgian market has showed its resilience to negative consequences from 2016 attacks. Although the number of arrivals and overnight stays decreased in 2016, these figures were still higher than those of 2014 (2015 having been a peak year). In addition, the number of nights per arrival remained at a high of 2.42 in 2016. On top of this, international investors and operators are now evaluating their presence and are expanding in key locations. This is underscored by an ever-increasing pipeline of premises with more than 100 rooms. In addition the average number of rooms per establishment is on the increase.
Recovery is in particular underway in Brussels which bore most of the brunt of the attacks with foreign tourists having retreated somewhat in their immediate aftermath. Indeed the 12-month moving average occupation rate has increased every month since its nadir in October 2016.

Where figures are concerned, Eurostat (quoted by C&W) indicates a fifth successive annual decrease of the number of hotels in Belgium, to 1,522 establishments in 2016. Nevertheless the decrease has been fairly marginal (35 fewer in 2016 against a peak decrease of 320 establishments in 2012). Additionally, the number of rooms has increased for the first time since 2011 to 58,791 in 2016.

In terms of future openings, in Brussels the second Meininger hotel will open its doors on Rue Bara near the Midi station in 2019. The building, owned by Nelson Group (also the owner of the Meininger at the former Brasserie Belle-Vue) will include 668 beds spread across 150 rooms. Maltese group Corinthia will invest heavily in the refurbishment of the Astoria hotel as planned, with an expected reopening in 2019. The premises will include 126 rooms and suites. Corinthias ambition for the hotel is to gain the status as the best in Brussels.

In Flanders, the major initiatives are the opening of the 135-room Park Inn by Radisson at Post X in Berchem, scheduled for the beginning of 2018. Along with this, Ghelamco is developing the 243-room Ringhotel next to KAA Gents Ghelamco Arena soccer stadium.
Moving to Wallonia, in Champion (Namur), Actibel is currently developing its Ecolys Business Center, a mixed-use scheme which will include a 120-room hotel expected to be delivered around spring 2018. Three major projects are currently underway within a small radius in Liège: the former Holiday Inn (Hôtel Alliance) next to the Palais des Congrès has been demolished and will be replaced by a 219-room Van der Valk by the beginning of 2018. Marriott is to open a 140-room Moxy on the Boulevard de la Sauvenière in 2019, and a 100-room Park Inn by Radisson is expected to open near the Cadran from 2020.
Elsewhere, a Novotel is set to open within the setting of the recently opened Rive Gauche shopping centre in Charleroi. The four-star hotel will include 128 rooms.