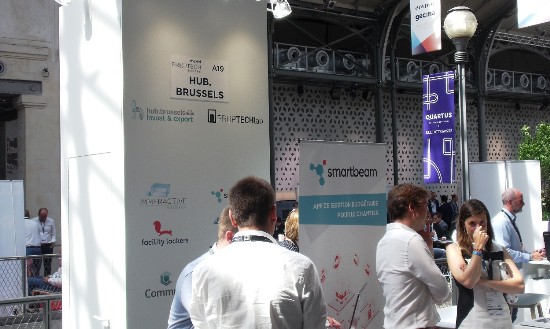 The way in which young Belgian companies see the development of the technical element of buildings  and particularly of their use  is to some degree illustrated by the domains in which they choose to operate.

At the Mipim Proptech trade fair held in Paris a few days ago, a number of Belgian start-ups occupied a central area under the name of Hub Brussels. Among these, Immeractive starts at the beginning of the des ign process, saying that the first illustration is a crucial step in the success of any property development, as it will form the basis of any future developments. The company says that right from the conception stage, it is able to provide a detailed description of a project based on sketches or rough drafts and put it into context using volumetry, sunlight and direction.

A stage further on, Smartbeam has developed a budgetary app for the worksite itself. This is said to enable a detailed look at works to be carried out, progress to be monitored and quantities of materials to be controlled. Centralised communication and the traceability of changes are also stated to be an improvement on the traditional way of managing sites, with information always to hand.

Moving on to the management domain, Juumo has developed an app to enable landlords to keep a check on their buildings, monitor rent payments and draw up digital contracts. Among benefits claimed by the company are that sight is never lost of unpaid rents, and that reminders can be sent out automatically.

Ikoab operates a further down the line, in the growing domain of co-living. It already has around 100 apartments which have used its services in Brussels, Charleroi and Liège. Investors ask for ideas on how to create a co-living space, and the company takes care of all the transformation works, rental management, cleaning, maintenance etc.

Another of the companies present demonstrates the merging of what were previously thought of as two domains: real estate and mobility. Commuty enables landlords to make better use of their parking spaces, allocating space for bicycles and cars and taking account of the needs of tenants and of limited parking spaces. This is claimed to optimise revenues from the buildings car park. Another part of the system is designed to boost bicycle use within a companys staff, with the advantages for health, the environment and fuel costs.

Remaining in the operational stage of a building Facility Lockers provides secured lockers and other concierge services within a building.

A final word on the Belgian interest in Mipim Proptech: among those seen in the corridors were, for example, UPSI Director Olivier Carrette and Realty head Mathieu Van Marcke.