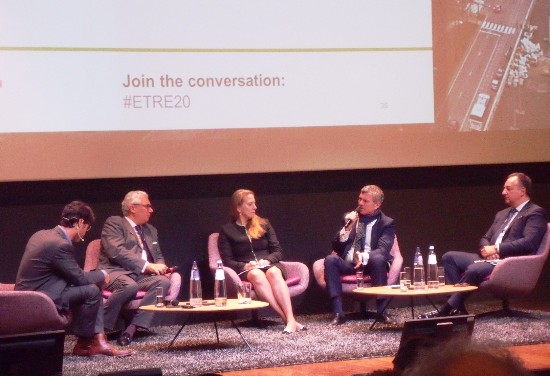 The round table which took place during the recent seminar of the ULI in Brussels featured three persons very familiar to the Belgian real estate world and two from outside, who had some sobering views on the positioning of Brussels. The other main element to arise was the issue of what is really important in real estate development.

Moderating the discussion was Benjamin Cadranel, CEO of citydev.brussel. The panel comprised AG Real Estate CEO Serge Fautré, Besix Red CEO Gabriel Uzgen and from outside of Belgium, Kari Pitken of Allianz real estate department and Craig Hughes who is in charge of real estate at PricewaterhouseCoopers.

To start with, let us take a look at what is important in development in the panels eyes. Serge Fautré gave a clue when he said that there is not enough investment in residential in Belgium. This has to be corrected. And he even brought the gilets jaunes into play, pointing out that they were protesting in Paris partly because of the cost of housing  8-10,000 Euros per square metre, against 3-4,000 in Brussels for example.

Kari Pitkin continued along a similar line. She said that Allianz is investing in student housing for rent, because universities are simply not doing enough. Yet university education will drive economic growth over the coming years. And Craig Hughes made the point explicit with a reference to Proptech. He said that we talk a great deal about property technology and its role in our assets, but what is really important is people. These real estate assets only have any value at all if the people want them. And within our industry we also need to upscale the people who work in it to keep up with the upscaled buildings!

To really emphasise the point about people, Craig Hughes put it like this: in a real estate transaction we talk about the investor  the developer  the constructor  the agent, and we havent even mentioned the people who are going to use the building yet.

Gabriel Uzgen was of much the same opinion. Urban densification and environmental awareness are two factors driving co-working and co-living. And returning to the point about technology, he emphasised that innovation is a means to an end, it is not an end in itself. While it will impact all elements of the construction process, it has to be used to the service of the clients (the people). The client experience is always key to everything.

Asked by Benjamin Cadranel how they considered the positioning of Brussels in a real estate portfolio, both Serge Fautré and Gabriel Uzgen (along with Benjamin Cadranel) admitted that the Region needed to market itself more. Kari Pitkin and Craig Hughes agreed with this, and said that at the moment, Brussels does not figure high in their thoughts  or hardly in their thoughts at all  when considering where to invest. It has to be said that this same criticism of the Brussels authorities was made during the early days of Brexit, especially in view of the aggressive marketing stance taken by cities such as Paris.

Finally, a word about another hot topic of the moment: co-working. Investors have seen their assets hijacked by outside operators, said Serge Fautré, but now they are taking back control of their own bricks by entering the co-working operations market themselves. No names were mentioned, but Befimmo with Silversquare is an obvious example.