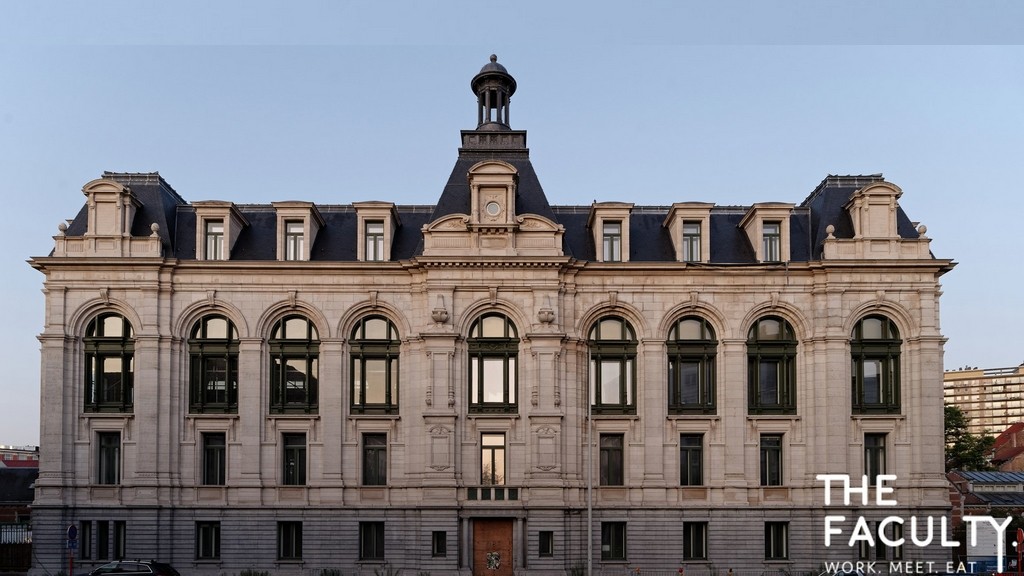 Named The Faculty a new development of the former Veterinary School in the proximity of Midi Station represents a further stage in the transformation of this historic site. When complete, this building will offer offices and coworking space, along with meeting rooms for seminars. The auditorium will offer 200 seats and gives access to what is described as a premium restaurant on the same floor. The working areas will also include a kitchenette and showers. Five independent offices have been created, each with a unique character and multiple possibilities: from individual offices with authentic finishes to landscaping surfaces, all under a glass roof. HASA architecture explains that its mission to renovate the main building of the former Veterinary School into into a contemporary business and conference centre, while at the same time strictly adhering to low energy standards. The building is thus being insulated from the inside with newly developed heating, ventilation, air conditioning, and lighting facilities. The renovated building will therefore meet current requirements in terms of low energy consumption, and heating consumption will be less than 60kWh / m². Few modifications, however, have been carried out to the outside of the building. The facades have been cleaned and two sober and transparent emergency stairs have been added, allowing the whole building to meet current security requirements. This development follows on from the work already carried out on those elements of the former school located to the rear, which have been transformed into residential accommodation with access control to the courtyard. In terms of operation, The Faculty will be run by Entrakt under the administration of the Commune of Anderlecht with the support of the European Commission and the Brussels Region. A word about the history of this site. At the end of the 19th century, parallel with the development of the veterinary district in Anderlecht, the plans for a new veterinary school in Brussels are being developed. The buildings in the boulevard Poincaré, in use since 1836, have long since ceased to exist and are more of a hindrance for the neighborhood. The eye falls on an area of 4 hectares in the current Rue des Vétérinaires. In 1910 the works are finished and some twenty majestic buildings in Flemish Renaissance style are erected. Director's house, machine building, laboratories, lecture halls, hospital ... all of them built on a complex of basements and corridors to resist the Brussels marshland. All are a testimony of the architecture of that time. In 1965 the school became a faculty and part of the University of Liège. But since 1991 the classified buildings have been empty.