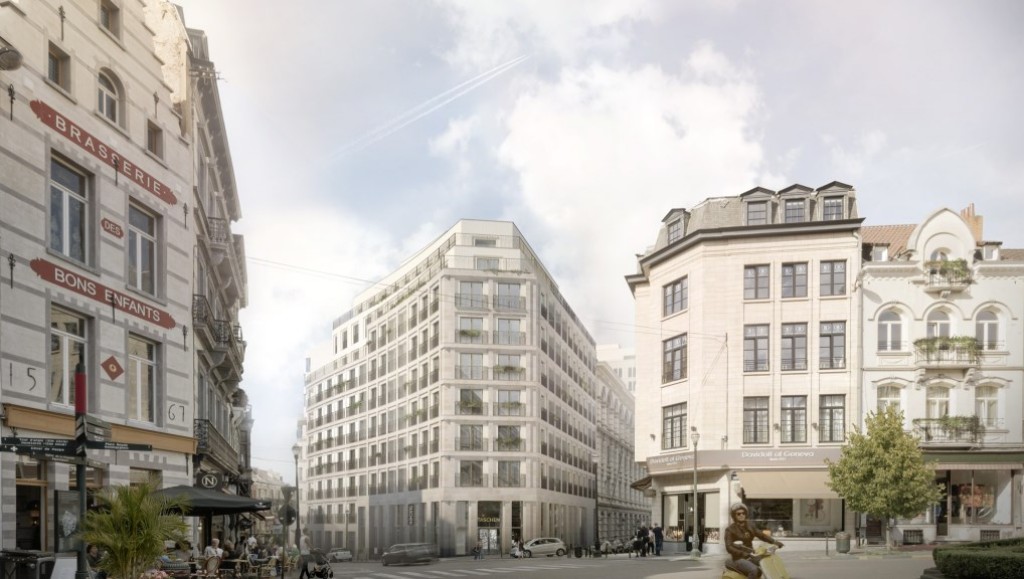 Over recent years, developer Immobel has successfully revitalised large scale historical sites by converting outdated vacant office buildings into mix-use complexes. Building mainly high quality contemporary apartments while preserving heritage buildings where appropriate. Chambon, in downtown Brussels, was a project of this kind with the historical headquarters of the former Belgian bank CGER at its heart. Another successful project located in the uptown area has been the conversion of the whole buildings block comprising the historical headquarters of Solvay.

Now, Immobel is setting about transforming a block of buildings in the Sablon district. This triangular block is bordered by different streets. Firstly the Rue Lebeau which connects the Sablon to the GrandPlace, then the Rue de la Paille which is extended by the Rue de Ruysbroeck, from which a passageway joins the Rue Lebeau at the junction with the Place de la Justice. The whole block is now somewhat inactive in character due to vacancy and mono-functionality (office/logistics buildings).

The redevelopment of the block will be carried out by the demolition of the existing buildings with the exception of the former Hôtel Central Téléphonique covering a quarter of the complexs surface (10,100 m2). The building, dating back to 1895, is located on the Rue de la Paille. It will be renovated and converted into a modern and versatile office building. It will regain its original grandeur while retaining its splendid façades and historical staircases.

After demolition of the other outdated office and logistic buildings previously occupied by Belgacom, five new buildings will be constructed. They are set to provide more than 200 high-quality apartments (22,100 m2), a four-star hotel with 150 rooms (8,200 m2), retail units (1,700 m2) and an underground large capacity garage.

The substantial residential function will bring new energy to the neighbourhood. For the exclusive use of the future residents a 1,500 m² private garden will be created by landscape architect Eole to the interior of the complex. The new retail space at ground floor level on the Rue Lebeau will attract passers-by on their way between the Sablon neighbourhood and the lower part of the city, especially towards the GrandPlace and its wide surrounding pedestrian area.

To alleviate parking pressure on and around the Sablon, the underground car park will have a capacity of 380 car parking spaces of which 220 for residents and 160 for the wider public. In line with the trend towards multimodal and soft mobility, the car park will also include 465 bicycle parking places.

The four-star hotel will face the Place de la Justice. Its upper floors, with an innovative concept, will be open to the public, with among others a restaurant and a panoramic terrace offering a stunning view over Brussels.

Sustainable architecture with respect of the fabric of the city

The final project design is the result of a competition that involved 47 architectural teams. The winners of this architectural competition are: Maccreanor Lavington MLA+, based in London and Korteknie Stuhlmacher Architecten located in Rotterdam. Assar Architects completes the team. In an interwiew, Gerard Maccreanor, founder of the architectural bureau which bears his name, comments on his companys vision for the Lebeau project: We intend to repair the fabric of the city and the streetscape. To connect people with the place and build new street frontages and public space so that the entire Sablon neighbourhood becomes desirable and enjoyable. We hope to restore the connection between the upper and lower parts of the city, a connection which was lost when construction of the Boulevard de lEmpereur cut the city in two and the Place de la Justice was no longer part of an intimate urban streetscape.

In July 2019, after an extensive preparatory process involving both public and private players, Immobel submitted its permit request for the Lebeau project. The public enquiry was completed at the end of last month. The estimated construction period is set to be around three years, starting at the end of 2021 and finishing in the second half of 2024.