You are here : HOME > NEWS > Across from Belval, the transformation of the brownfield RoutLëns is taking shape

Across from Belval, the transformation of the brownfield RoutLëns is taking shape 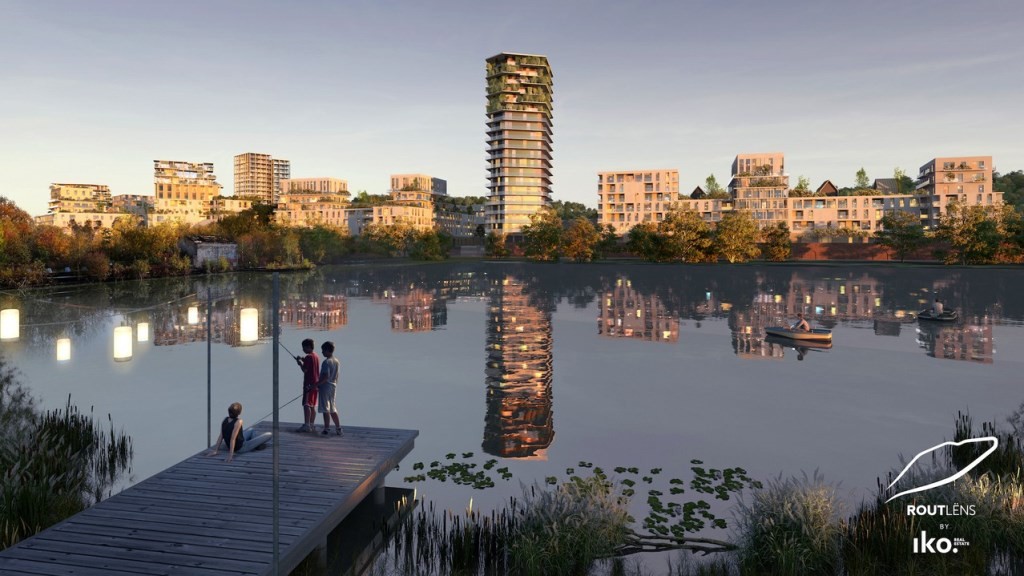 The red soils of the South of Luxembourg from which iron ore was mined were a bridgehead of the steelmaking industry right up to the 1970s. Since then, most of the sites have been at a standstill. They became industrial eyesores. One of them, the RoutLëns site (the Red Lentil), has been acquired by Luxembourg real estate developer IKO Real Estate. The site, which extends to 11 hectares, is located as a prolongation of the city centre of Esch-sur-Alzette, just before the French border. By 2035, RoutLëns is set to be home to almost 3,000 new inhabitants.

For the past year and a half IKO Real Estate has been in discussions with the local population and authorities, reflecting on how the site should be transformed. In mid November, during a livestream, IKO Real Estate and the city of Esch-sur-Alzette presented the masterplan for the sustainable redevelopment of the site. The project fully takes on board and integrates its industrial history and its heritage, turning what might have constituted a weakness in to a real dynamic strength. To conserve the memory of the place, certain existing buildings (9,100 m2) will be preserved and reallocated to more contemporary uses.

A video brings to life the soul of this industrial heritage. The central feature of the redeployment of RoutLëns will be the Industrial Culture (Culture Industrielle) pedestrian walkway. This central axis will cross the site from one side to the other. It will connect the five industrial buildings to be reassigned: the ventilation halls, the turbine building, the TT stores, the porticos, the shunting portals and the surrounding wall along the road which leads to Audun-le-Tiche. See the video >>

This district will principally be dedicated to housing (128,300 m2  almost 1,500 residential units) with the integration of the necessary infrastructure facilities so that, by contrast with dormitory towns, this new district will be an agreeable place to live, work and relax. The site will therefore see the creation of a school, an infant nursery, 9,000 m2 of offices and co-working space for small and medium enterprises, a covered market with a micro-brewery, 4,600 m2 of local shops and services, along with a sports hall.

The green areas which the designers of the site wished to be a major feature, are everywhere to be seen. On the ground with, in particular, the planting of more than 700 trees, but also at height, as the roofs of the new buildings will be planted. On top of this, it is the aim of IKO Real Estate to persuade the public authorities to transform the vast extent of ponds opposite RoutLëns, on the other side of the Luxembourg/ France border, into a park.

The master plan for the redevelopment of the site has been drawn up by Parisian agency Reichen et Robert & Associés, which specialises in transforming industrial eyesores and conserving heritage. The landscape architects of Phyolab have also played a major role in the masterplan. These planners have arranged the density of the site in a very particular manner. Overall, the constructions will be between three and five storeys, with certain buildings rising to eight storeys. Two residential towers of 19 storeys (60 metres high) will dominate the complex. They will echo the neighbouring Belval towers which the new inhabitants will be able to see in the distance.
The directors of IKO are looking for diversity in the style. To achieve this, they will launch architectural competitions for certain of the lots.

The RoutLëns project fits in with the strategy of the Luxembourg Ministry of Mobility and Public Works, which aims to promote inter-modality in terms of transport. This in particular includes the creation of a cross-border high frequency bus service referred to as BHNS (Bus à Haut Niveau de Service) to replace the rail shuttle liaison with Audun-le-Tiche. A stop half way along the RoutLëns site will provide a connection with Esch railway station and the rapid trams which will leave from the Alzette district (currently the Esch-Schifflange abandoned site). It is also planned to integrate the Esch-Alzette  Belval cycle-way into the site.

IKO is shortly to lodge the Public Planning Request (PAP in Luxembourg). The public enquiry will then be able to take place at the beginning of next year. The demolition and clearing of the site will follow in due course. The de-pollution of the site, to render it suitable for residential accommodation, should be completed by the end of 2021.

The new constructions will emerge from the ground in 2025. First to be seen will be the educational campus, which will include a school, an infant nursery and a sports hall. The residential accommodation will follow because this represents a national priority emphasizes Eric Lux, CEO of IKO Real Estate in an interview given to PaperJam. He went on to comment: This 160.000 m² laboratory demonstrates the vision we have for real estate. Urban planning is set to change over the years to come and will have to respond to challenges such as climate warming, quality of life and preservation of resources. The new technologies available to us in the real estate domain will also have to be taken into account.

RoutLëns is a very good illustration of the vision of IKO Real Estate for projects it undertakes: putting people and nature back at the very heart of every project. IKO is conceiving new solutions for building cities, which preserve the eco-system and in which man takes possession of the urban space.

See this by yourself in the presentation video >>