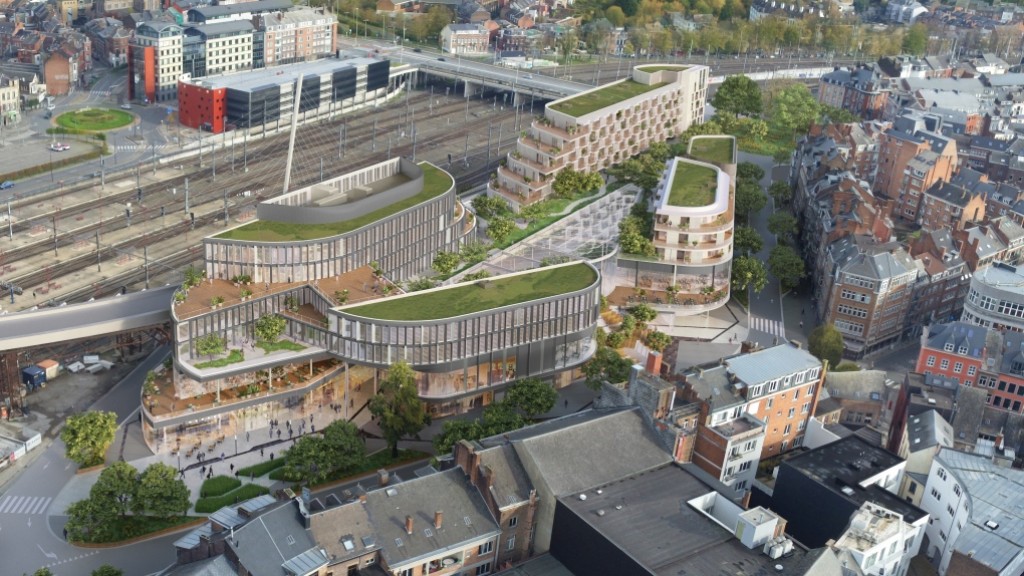 It has now been more than 10 years that discussions between public authorities and developers to build a new urban shopping centre in Namur integrated into its multimodal railway station have been taking place. Representing a link between the main thoroughfare and the station district, this shopping centre is to be built on the Léopold block on which are currently to be found the bus station and the QPark opposite the Place Léopold, and on the other side, close to the station, the large C&A store along with some other shops along the Avenue de la Gare and the Rue Borgnet.

Taken over five years ago by Besix RED with French architect Jean-Paul Viguier, the shopping centre project has been entirely re-thought to become a mixed use complex. The size of the retail element has been reduced, from 23,000 to 18,000 m². The complex will now include 11,600 m² of residential accommodation and 10,000 m² of offices. Wide vegetalised footpaths will be a major feature along with rest areas. The number of underground parking spaces will be increased to almost 900. These will be of benefit to the users (shoppers, workers, inhabitants) of the new complex but also to all visitors to Namur city centre.

This project is set to breathe a new dynamic into the Walloon capital and should attract consumers from outside of Namur, which is thus set to see its urban retail offering coming up to the level it deserves. One of the major obstacles which has prevented this project from becoming a reality up to now is the competition that the shopping centre would represent for small city centre shops. It was absolutely necessary to avoid seeing the centre of Namur and its shops deserted. A consensus has now been found around the new centre. The size of the retail element has been reduced from 23,000 m2 (without the C&A superstore) to 18,000 m² (including C&A superstore).

All of the retail units will have a surface area of at least 200 m2. In view of the fact that the average size of the vast majority of shop units in the city centre is under 100m², the new proposal clearly complements that which already exists, and the risk of retailers moving from their current location to Léopold Square is extremely limited. Quite the opposite effect is in fact likely to be the case, as according to the city council of Namur, several retailers had let it be known that they were considering leaving Namur due to the lack of an offering such as that being proposed! The question is therefore no longer that of a retailer leaving the centre to go to the Léopold district, but of quite simply leaving Namur to set up in other cities.

As long as five years ago, Maxime Prévot, the Mayor of Namur, commented in similar terms on the future project: This shopping centre is of reasonable size and should augur well for the shops on the Rue de Fer, and in addition it should be able to offer the medium and large size units which retailers cant find in the centre of Namur.

The COVID crisis and its repercussions on the way we do our shopping have been taken into account. Retail, and in particular shopping centres, have been highly impacted and felt the strong competition represented by on-line shopping. Faced with this, and in order to guarantee the long term future of physical shopping, the designers have provided two responses.

On the one hand the shopping centre project has mutated into a mixed use complex bringing together offices and residential accommodation along with the retail centre. This therefore becomes a living area at all times of the day and into the evening. This has been taken into account for the construction and layout of the zones. In order not to create closed blocks, but to ensure that there is an opening out into the adjacent streets, the galleries and the positioning of a central patio mean that the complex can always be crossed, from the station to the Place Léopold, from the entry located as a prolongation of the Rue de Fer towards the rear of the building.

And on the other hand, in terms of the constructions themselves, all of the built areas will be reversible where functions are concerned. It will always be possible to convert the retail areas into offices or residential accommodation as required.

The station district is to become much denser. On the other side of the station, along the Boulevard Melot, the AXS project developed by Baltisse will see seven buildings constructed to provide 39,000 m2 of offices along with a 102-room hotel to be operated by hotel chain B&B hotels, along with 222 student flats. The Red Cross has already decided to leave its Brussels offices and relocate into one of these new buildings.

Just a little further away, at the junction of the Avenue des Combattants and the Avenue des Croix de Feu, on the site of the former AVIS building, the construction of the future Walloon headquarters of Belfius bank is coming to completion (6,000 m2). In addition, directly alongside the station on the site of the former Post Office, the Walloon Region has acquired the Cross Point project, which is set to see the construction of a 10,000 m² office building.

There can be no doubt that these new occupants will enable the cafes and restaurants which will locate in and around the new shopping centre, to operate at full speed.

Integration into the station district

The administrative council of the City of Namur has been made aware, just a few days ago, of the new framework for the scope of the future urban redevelopment charter (PRU) which is set to regulate the future of this project at the entrance to Namur railway station. Up until the present time, no residential accommodation had been allowed to be constructed in this zone.

In 2012, the project for the new multimodal station in Namur was first adopted by the Walloon government. It enabled various modes of transport to come together on a single platform: car, bus and train. The new bus station would have to move from its current location to be constructed directly on the covering of the railway station. An access ramp would be located to the rear of the shopping centre up to the future bus station.
The mixed use shopping centre project will benefit from the relocation of the bus station and improve the area where the current car park represents a blind wall seen from the Bomel area.

Today a wide consensus  both commercial and political  has established itself around the project. It has been approved by the administrative council of the City of Namur and will now be sent to the Walloon government for their approval, before the organisation of the public survey followed by the granting of the building permit.