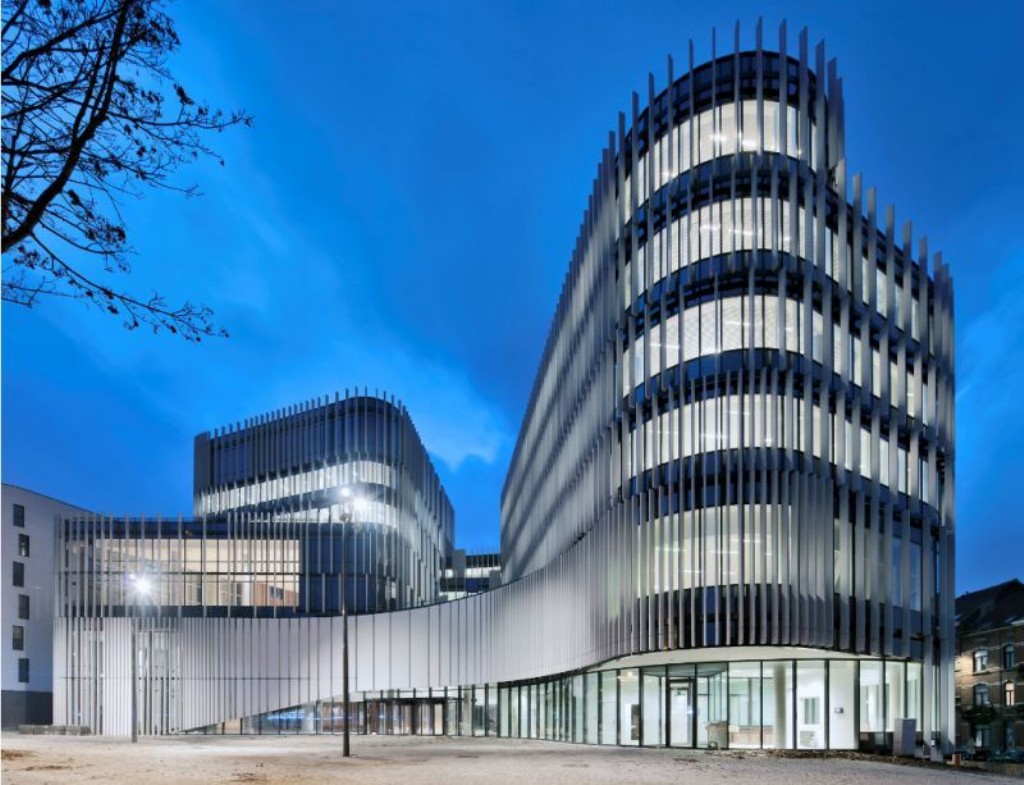 Constructed Avenue des casernes, close to the interchange between the Chaussée de Wavre and Avenue dAuderghem, the new Etterbeek city hall immediately catches the eye. Bright white, its elegant horizontal curves form a stark contrast to, and a pleasing complement to, the top to bottom vertical concrete pillars which adorn the entire façade. And these pillars also play their part in the environmental performance of the building. Their coating generates energy depending on the position of the sun. The vast glazed facades which have characterized most new office buildings over the past couple of decades are thus not the most visible feature, even if this glazing is perceptible behind the concrete pillars.

The building, designed by Jaspers-Eyers architects in collaboration with BAEB Architects goes further in meeting current standards. It is the largest building in Brussels constructed according to the Passive House sustainability standard and has been awarded BREEAM Very Good Certification. The total surface area of around 20,000 m² will house, following its opening, communal and governmental services along with the CPAS, some police functions, and a funeral home.

Other functions planned for the immediate vicinity help to turn this complex into a new mixed-use city district. 41 social housings are build aside the city hall on the avenue des casernes; a restaurant is included in the basement of this second building. Etterbeek city hall is separated to the social housing building by a pedestrian connection. This element relates a future public park with a new public plaza.

The qualities of the new city hall have also been recognized internationally. It has been crowned as best public service architecture in the International Property Awards, at a ceremony held in London last week. These Awards, are open to residential and commercial property professionals from around the globe.

It should be noted that, in conjunction with other architectural partners for its various developments, Jaspers-Eyers Architects were also honoured with awards for ZIN in No(o)rd and Spectrum in Brussels, and Immobels Eden Tower in Frankfurt.