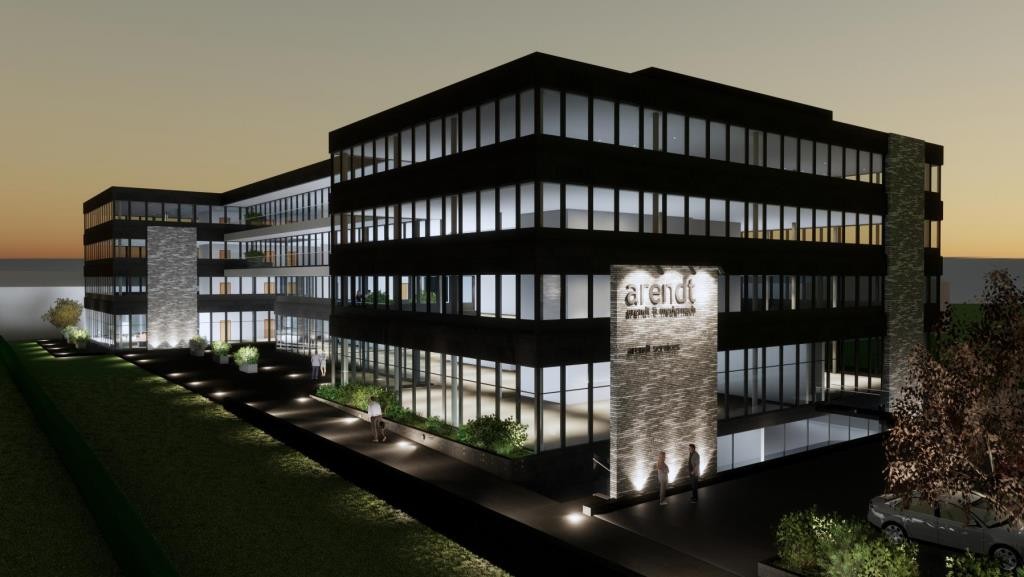 Arendt 9 was one of the completions in the fourth quarter (Image: paperjam.lu)

A record fourth quarter in the Luxembourg office market, driven by large pre-lets, sent annual take-up soaring 30% higher than the previous year. In its report, broker CBRE points out that the EU and Luxembourg State closed substantial pre-lets in the Kirchberg and Station districts for a combined 117,300 m². Vacancy increased slightly to a still very low 3.5%. Prime rents are stable, though select markets have seen increases this year, including Kirchberg (42 /m² /month) and Cloche dOr (35 /m² /month). Development completions were down in 2020, but should pick up considerably in 2021. Investment was stronger in the fourth quarter, with the annual figure totaling 1.6 billion and prime yields compressing to 3.4% for the best assets.

Looking a little more closely at the market, CBRE finds that take-up in the fourth quarter of 2020 amounted to a substantial 160,000 m² to bring the year total to 342,000 m². This is one of the best years on record, which, CBRE points out, seems all the more surprising given the Covid-induced uncertainty and restrictions (pre-lets are now being recorded at the time of signature). Despite the short-term disruption, Luxembourg is a growing market with expansive state occupiers. And public occupiers drove take-up in the fourth quarter, accounting for almost 40% of total annual take-up. The biggest deals were the European Investment Bank pre-let of the 65,000 m² Extension building in Kirchberg, and the CNS pre-let of the 52,300 m² office in the Station district. Also notable was the Luxembourg States pre-let of the 10,190 m² Twist project in Esch-Belval. Public bodies - particularly the Luxembourg State - continue to be reliable office occupiers, absorbing both vacant properties and new construction in diverse markets.

This year has also seen a rebalance of interest between Luxembourg City and the periphery. Esch-Belval (30,127 m²), Leudelange (27,080 m²) and Bertrange (11,103 m²) all recorded notably higher take-up than the previous year. While activity in Luxembourg City has been hindered due to a lack of available space, the peripheral markets are gaining credibility with occupants as they continue to develop. The markets provide an attractive working environment in terms of new, quality projects, growing services and amenities, and car accessibility.

Approximately 153,000 m² of office space is currently considered vacant out of a total stock of 4.43 million m². This figure, it is relevant to note, is less than a years worth of take-up, indicating a shortage of available space. The result is a very tight market with a vacancy rate of just 3.5%. This evolution is a slight increase over the previous quarter. Bertrange, Capellen, Esch-Belval saw an upward drift in availabilities. In the third of there, the increase was the result of a new project being delivered (Capelli Towers (2,286 m² available) and parts of Red Sky also becoming available. Nevertheless, vacancy in the growing Esch-Belval market stands at just 3.6%. Central markets are very tight. The CBD, Kirchberg, and Station all have vacancy of under 2%, while the Cloche dOr is slightly higher (but still very low) at 4.2%. Elsewhere, the Airport district still has around 7% of space available. As an indication of just how starved of space the market is, there is just one building with more than 5,000 m² available. This is Monnet 8 in Kirchberg with 5,258 m². Four buildings are currently offering between 4,000 and 5,000 m² available.