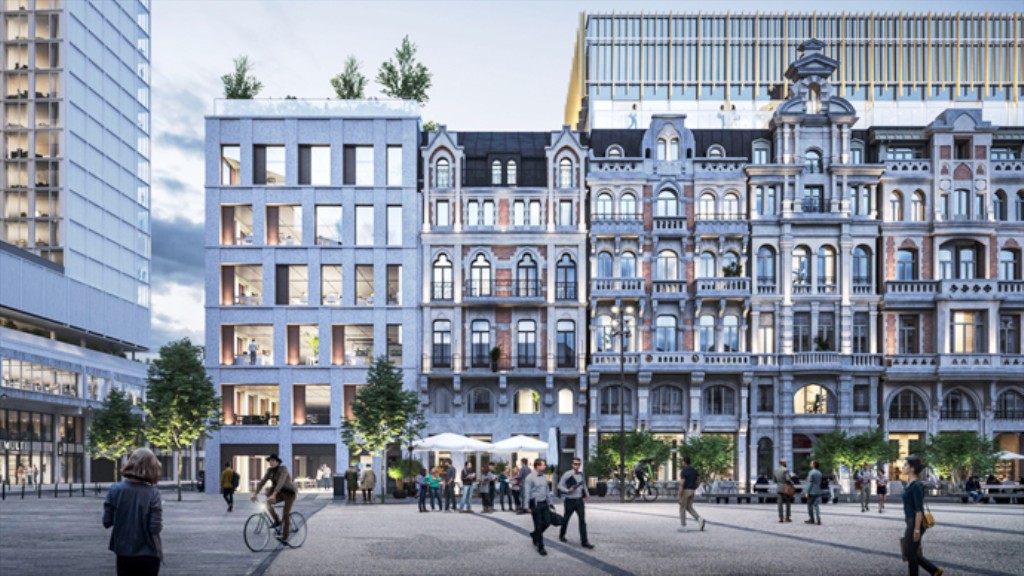 For the development of the Brouck'R project, the historic Belle Époque-style facades of the buildings in Place De Brouckère will be preserved and renovated | picture IMMOBEL / BPI Real Estate - A2RC and Henning Larsen Architects

Quares Student Housing has confirmed the purchase of 129 student flats in the BrouckR mixed use project being developed by Immobel and BPI Real Estate. The company is an experienced investor in the student housing niche real estate market. Quares Student Housing currently manages around 1,000 rooms located in 29 properties (5 in Brussels, 20 in Antwerp, 3 in Ghent and 1 in Liège).

Quares, the property service provider that also manages Quares Student Housings investment fund, will manage and rent out the student flats. Instead of outsourcing these activities to third parties, everything will be in the hands of a single company. This guarantees effective long-term maintenance and management, whilst also allowing for the creation of shared facilities that further enhance.

This latest move comes within the context of Brussels being described as being the largest student town in Belgium (around 110,000 students) but the one most in need of supplementary accommodation. More than half of these students, according to Quares, have to look for an apartment on the private market which puts pressure on the regular rental market.

The project BrouckR takes its name from its location, the Place de Brouckère, which forms part of the redevelopment of this part of the historic center of Brussels. BrouckR large development with a total area of 41,000 m2 provides for a demolition-reconstruction (and renovation of classified parts) of the head office of the insurer Allianz located rue du Laeken, rue des Hirondelles, place Brouckère en rue des Augustines. Allianz relocated their headquarter last year in one of the Möbius tower in Brussels North district.

The new mixed complex has been designed by A2RC Architects and Henning Larsen Architects. With a combination of offices (8,800 m2), shops (3,150 m2), a hotel with 145 rooms (5,240 m2), 183 apartments and 129 student rooms (22,640 m2), the city, developers and architects wish to attract a diverse audience and thus revitalize one of the most famous and historical districts of Brussels.

Watching the interview of Danish Jacob Jurek, partner at Henning Larsen Architects, gives you a better understanding of how the new Brouck'R project will contribute to the revival of the neighbourbood.

The location of BrouckR project in the Brussels city center new pedestrianized zone is ideal for student life, as Herman Du Bois, CEO of Quares Student Housing points out: With the proximity of the universities campuses and the cultural sites, the excellent public transport services and of course the many cafes, this district certainly provides everything a student needs. Where access to the main campuses of the Brussels Free Universities is concerned (ULB and VUB) there is a direct metro service from De Brouckère to the Hankar and Delta stations with a journey time of about 10-15 minutes.