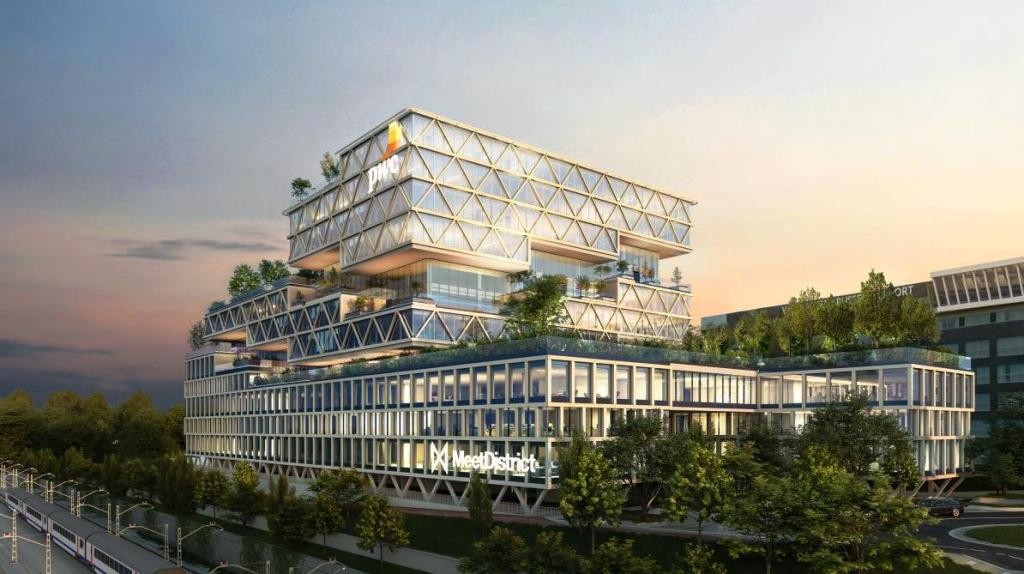 The new PwC Campus by Ghelamco and Assar Architects

In a recent report, we highlighted the Ghelamco/Assar project The Wings in the airport district. This spectacular district is just one of a number of other developments set to take place, however, as real estate expert Cushman & Wakefield points out in its latest report.

First of all, a fact which is perhaps surprising in view of the eternally poor performance of the periphery of Brussels in terms of annual office take-up. The best performing district outside of the CBD over the last five years has in fact been the Airport district with an average annual take-up of 45,000m² and around 35 transactions per year. Currently, the district is ranked fourth of the 11 composing the Brussels office market where take-up is concerned, the three above it all being in the CBD. Nevertheless, vacancy stands at 19%, against very low single figures for the CBD. The total office stock of the Airport district is 1.16 million square metres, approaching 10% of all Brussels stock.

Cushman & Wakefield also says that new schemes are almost all fully let before delivery. The tenant focus on quality buildings with high environmental performance has seen a response for a long time in this district and has been behind the decision of key tenants to locate or relocate in the best assets (namely the Corporate Village or the Airport Plaza) or even to opt for built-to-suit assets such as Deloitte on the Brussels Airport terminal and more recently Plastic Omnium, 3M or SECO in the Park 7, currently being developed by Immogra. This trend is further confirmed by the successful pre-letting of the new PwC Campus, under development by Ghelamco. The 30,000m²built-to-suit project is 100% pre-let and will house PwC Belgium and MeetDistrict. As a positive result of this trend and despite a slight decrease of the prime rental levels due to the Covid-19 outbreak, C&W goes on, rental levels in the best assets have remained more stable and even reached  200/m²/year in some very specific locations. These rents are also expected to increase in the coming months.

These positive market fundamentals are contributing to a growing interest of investors for this location. Around 150 million Euros have been invested on a yearly basis since 2016 and this was even higher between 2017 and 2019 (2020 was at only 65 million Euros as a consequence of Covid-19). Competition has been (and still is) fierce for the best assets as witnessed by the purchases of the Gateway for a 4.65% yield in 2015, PassPort in 2018 (the first asset sold below 4% in the Periphery) and a continuous decrease of the prime yield (for 3/6/9 year leases) since 2014, to a point where this currently stands at a historically low 6.5%.

In the light of all this, investors and developers remain attracted to the Airport District and have shown appetite for a very broad set of schemes as the recent purchases of Pegasus Park andthe Corporate Village Aramis confirm. And the ongoing sale of the new PWC Campus shows that there is still a lot of appetite from international investors. One of the most recently concluded transactions is the Airport Garden, a multi-let office scheme with redevelopment potential. The asset is strategically located next to NATO and will profit from the new bicycle highway as well as the coming tram line that will connect the asset (and the centre of Brussels) with the airport.

On top of this, and as proof that remaining in the district is important, certain corporates have decided to sale & lease back their buildings and refocus on their core business rather than their real estate. One example is 3M, the American multinational, which recently sold its property and plot of land (just up the road on the airport side of the former NATO headquarters) to developer Immogra. The existing buildings have been demolished and a new office campus is under construction, which will include the new 3M HQ. The so-called Park 7, in front of NATO, has attracted a second major tenant, SECO, which has opted to locate its new premises in the second phase of the development of Park 7.