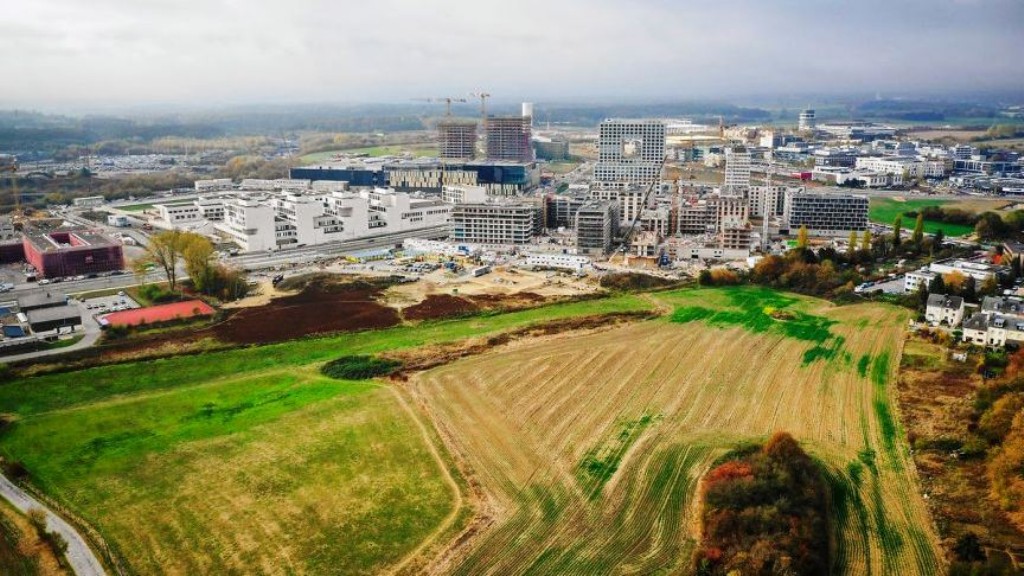 Photo of the site and of the Cloche d'Or district : Pierre Matgé

The provision of green areas and parks within districts which in previous times would have been almost exclusively constructed is now a central strategy for most new mixed use developments. One such district to benefit from this trend is the Cloche dOr in Luxembourg.The park being developed in this district will be named the Gasperich park and will be the largest park within Luxembourg city boundaries. As reported by paperjam.lu, a number of administrative problems and then the pandemic, have caused serious delays to the laying out of the park since its original start of works in 2020. When completed it will take its place alongside the offices, shopping centre and residential accommodation which already make up this new Cloche dOr district.

The 16.6 hectare park will be particularly important in view of the predicted increase in population of the area. This is said by Lydie Polfer, Mayor of Luxembourg city (quoted by paperjam) to have already increased from around 5,600 inhabitants in 2015 to some 8,200 now. Designed by the winners of the landscape architects competition  Mersch Ingénieurs-paysagistes  the new park will feature indigenous trees and bushes and around 100 fruit trees, the total number of trees amounting to around 900. These are being sourced from nursery plantations mostly located in Germany and the Netherlands. The Mayor goes on to say that they will require about ten years to reach maturity.

Along with the trees, there will be lawn areas and large flowerbeds, the whole of this designed to encourage biodiversity. Another feature will be the banks of the Drosbach stream, which will be tidied up in a natural manner along a course of just over 800 meters. As well as being attractive, this operation and a 7,000 m² pond of three meters in depth, form part of the strategy to avoid future flooding. Play areas for children also form part of the plan, as do multi-sports facilities, beach volleyball, an exterior fitness area and two pétanque courts. A café-brasserie will be accommodated in a new pavilion. Walkways and cycle paths are also being provided.

The construction schedule will see the final operations  installation of the street furniture  take place by the beginning of 2023. If all goes according to plan, the park should open by the spring of the same year.