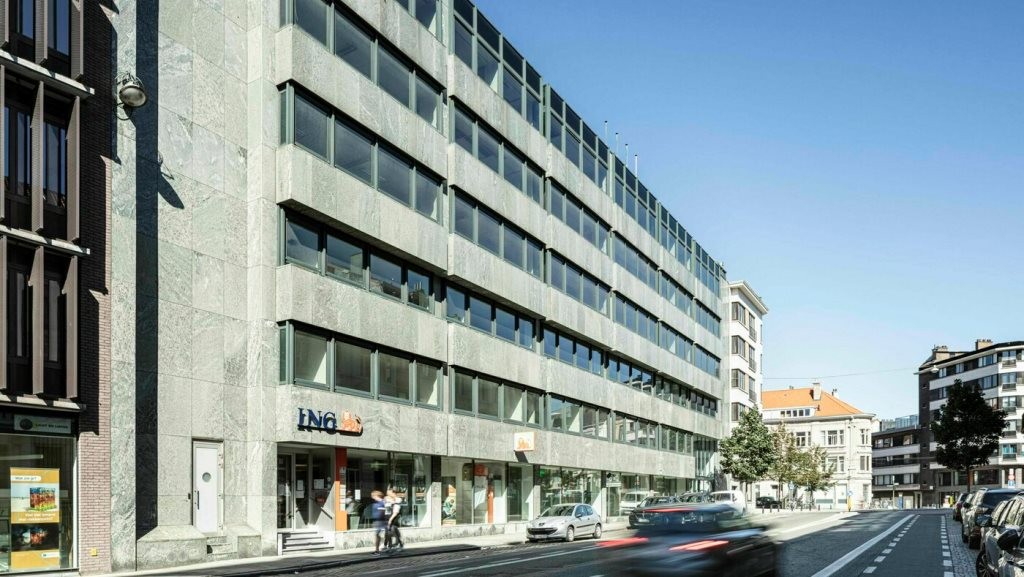 Partena has acquired 7.125 m2 of the Greencourt building located in the heart of Ghent next to the main railway. In-depth renovation by developer Baltisse

Real estate advisor JLL has analysed the performance of the office market in Flanders over the first half of this year. It concludes that as we begin to come out of the worst of the pandemic, the market is gradually returning to normal, with growth in all major cities.

Looking at the figures produced by JLL for the first half year in Flanders, office take-up leaped to 102,250 m², up by 79% compared to the same period last year, and even 7% higher than the average for the five pre-pandemic years. The number of transactions also showed very healthy growth, up by 50% on an annual basis in the five major cities  Antwerp, Ghent, Mechelen, Leuven and Hasselt. The average transaction size across the big 5 cities came in at 651 m², 20% above a year ago, and outperforming the pre-pandemic average by 11%. It is remarkable, says JLL, that recovery has been observed in all Flemish cities. Antwerp leads with a 52% jump year on year to 40,442 m² and the number of deals is 17% higher at 68. It is, however, 20% lower than the 5-year average.

Ghent has already equaled the full year 2020 take-up volume with transactions up 40% year on year to 34,900 m². The number of transactions bears witness to the recovery with an 83% jump year on year and an increase of 34% compared to the 5-year average. Activity in the smaller cities is encouraging as well: Mechelen recorded one of its largest transactions ever with the sale to SD Worx of the former headquarters of failed retailer FNG Group (11,000 m².). In the six-month period, Mechelen returned a take-up of 15,380 m². against 980 m² in the same period last year, exceeding the 5-year average by 86%. Even Hasselt, traditionally quiet, recorded take-up which rocketed by 378% year on year to 7,189 m²with prelets in Futurns Heros Business Park. Finally, take-up in Leuven came in 41% higher at 4,339 m².

The continuous decline of vacancy started reversing mid-2020 and early 2021, JLL has concluded. Compared to earlier forecasts, however, the impact of home-working on vacancy has been moderate so far. In Antwerp, for example, vacancy stabilised at 7.2% which is the same level as at the end of 2020. This can be partly explained by the absence of speculative completions during the half year, and by the temporary removal of vacant properties such as The Sage (Ring district) during renovation works. Ghent contrasts with most Belgian cities with a very low structural vacancy rate  at the end of June it was 2.23%. In the other cities, the level of vacancy has deteriorated a little over the past 12 months, especially in Mechelen (from 5% in 2019 to around 7% at the end of 2020, (unchanged since then), Leuven (from 4.2% to 5.2%) and Hasselt (from 6% to 6.7%).

Development activity has restarted in Flanders, with a focus on green projects, in the very best locations accessible by public transports. Banimmo successfully launched its Networks project in the Loop area of Ghent. Two units totalling some 15,000 m² are currently prelet to the tune of around 70%, a few months before completion. Similarly Baltisses refurbished Green Court close to the station, acquired a year ago from Baloise, has recently been presold to Partena for owner occupation. Additional speculative projects are planned by 2023 in the best locations in the South, close to the E40 motorway, namely the MG Square (7, m²Immogras Drie Koningen (25,000 m²in phases) and the redeveloped Esko site of IPES (up to 20,000 m²).

In Antwerp, the recent developments are now fully occupied, although JLL has identified a new potential of 224,000 m². IRET is going to capitalise on its success story of Post X and launch a project of 15,000 m²next to the Berchem station. In the same area, Cores and Alides are planning a new large-size project. The areas surrounding Mechelen train station are ideal locations for new projects; the pipeline is estimated at 68,000 m². Among the projects in progress or ready to start is an industrial site that Codic and PSR are to redevelop as a mixed project comprising 19,000 m²of office space and 4,000 m²of residential. In Leuven, Virix is planning an extension of 15,000 m². to the Ubicenter, whilst the speculative development potential of Hasselt is estimated at some 45,000 m².