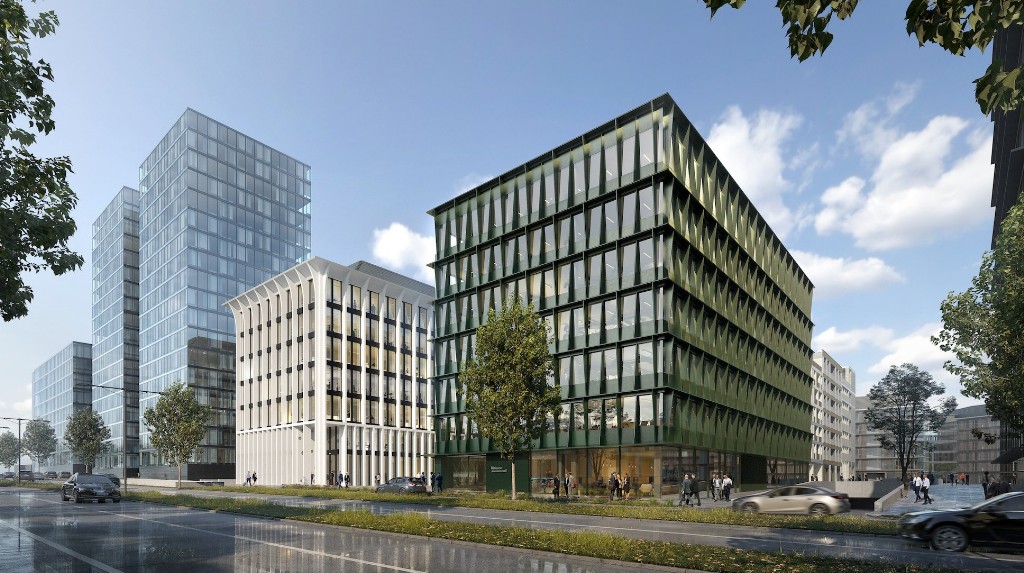 The Emerald in the foreground and the White House to its left | Image: Grossfeld PAP

There is considerable new development being planned or taking place in Luxembourg at the moment. To begin with there is a duo of buildings in the rapidly developing Cloche dOr district. Developed by Grossfeld PAP and as reported by paperjam.lu, the buildings White House and The Emerald will total around 6,800 m² each over six floors. The two buildings are very strategically located on the boulevard F. W. Raiffeisen, right opposite the Cloche dOr shopping centre.

Paperjam.lu goes on to give some details of The White House. The White House is designed by Valentiny hvp architects and is described as having particularly vertical-style façade with a two-level podium unit. White concrete vertical columns on both the podium and the remainder of the building produce this effect. Behind these columns is a facade in glass and aluminium. The roof will be vegetalised in order to retain rainwater. Inside, each floor can be divided into two for separate tenants and a maximum of flexibility has been integrated into the design. Underneath are 40 parking spaces. In terms of environmental and other usage norms, Breeam Excellent certification is being targeted.

Where the Emerald is concerned, it is designed by architects Andrew Phillips who, on their own website, point out that the building is linked by a new tram to the centre of Luxembourg City. It is still referred to by its code name of e.03, and the architect describes it as follows. It includes an exploded asymmetric core, the conventional elements of which have been redistributed to provide generous day-lit vertical circulation, and a floorplate cut into two distinct, controllable zones.

The buildings large open plan workspaces will have excellent daylight, fresh-air ventilation, and panoramic, wrap-around views. The easily adaptable, loft-like spaces can accommodate a variety of planning approaches, including cellular or open-plan collaborative working. Dark green, raking, anodised-aluminium mullions organise a system of automatically deploying sunshades. The facade finish will react to Luxembourgs changeable light conditions throughout the day and across the seasons.

The project scheduled to be completed in 2023.