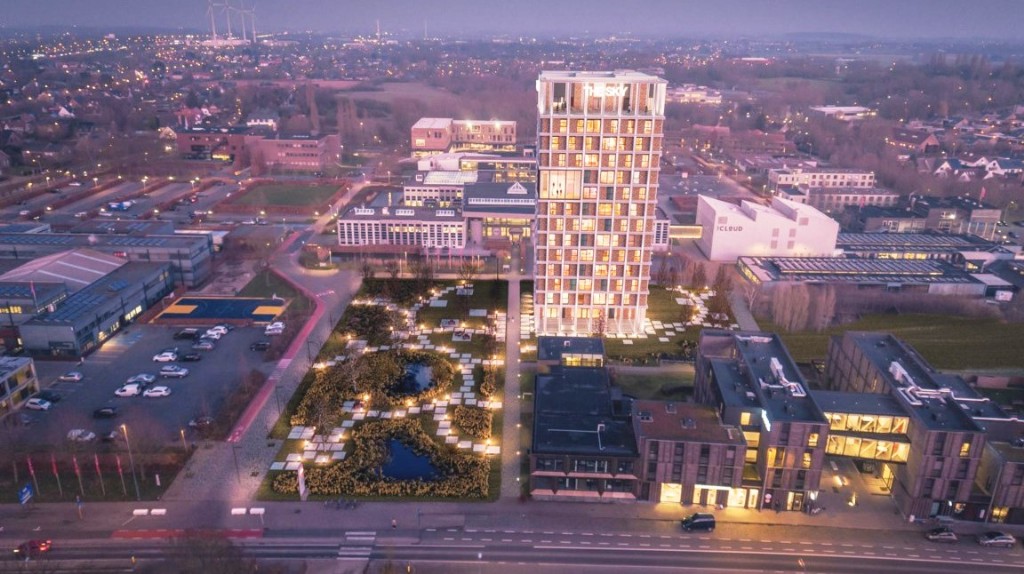 The City of Kortrijk and project developer ION have announced that the building permit has been approved for a 53 meter high residential tower with 192 student rooms to be erected on the VIVES campus in Kortrijk. Over the past five years, the number of students in ortrijk has increased by 5,000 to no fewer than 16,000 students. This has led to an increasing need for the construction of student room. Since the decision was made in October 2020 for the temporary lifting of the moratorium and allow new student rooms to be constructed, plans have been made for around 1,300 new rooms and some 15 percent of these will be located in the new residential SKY tower on the campus of VIVES University of Applied Sciences.

The student tower has 16 floors  12 of which have rooms with a shared kitchen  and will also have a small auditorium with a view on the park. There will also be a multi-purpose space that will serve as a study or library, a coworking space. The eye-catcher of the building will be the large roof terrace with a panoramic view of the Kortrijk skyline. The project will also become an example of sustainability, which is partly due to so-called concrete core activation: a construction technique in which pipes are laid inside the concrete, so that the concrete itself can be heated or cooled.

The master plan provides for the VIVES University of Applied Sciences site to be connected to those of Kulak and Syntra, so that it becomes one large campus, in essence. This is precisely why a new 35 ares park with its greenery is being constructed immediately alongside the SKY tower. And this on a location that is currently used as a car park. Parking on campus is prohibited for the safety of cyclists and pedestrians. A wide network of cycle lanes will soon run through the various campuses. The SKY Tower project will consequently provide a bicycle shed with space for 600 bicycles. Thanks to a collaboration with Kortrijk Xpo, students can park their cars there free of charge during the week.

ION is already looking for private investors for the student rooms. VIVES University of Applied Sciences, for its part, will be responsible for the operation of the rooms. Construction of The SKY tower will start early next year, so that the first students can move in before 2025.