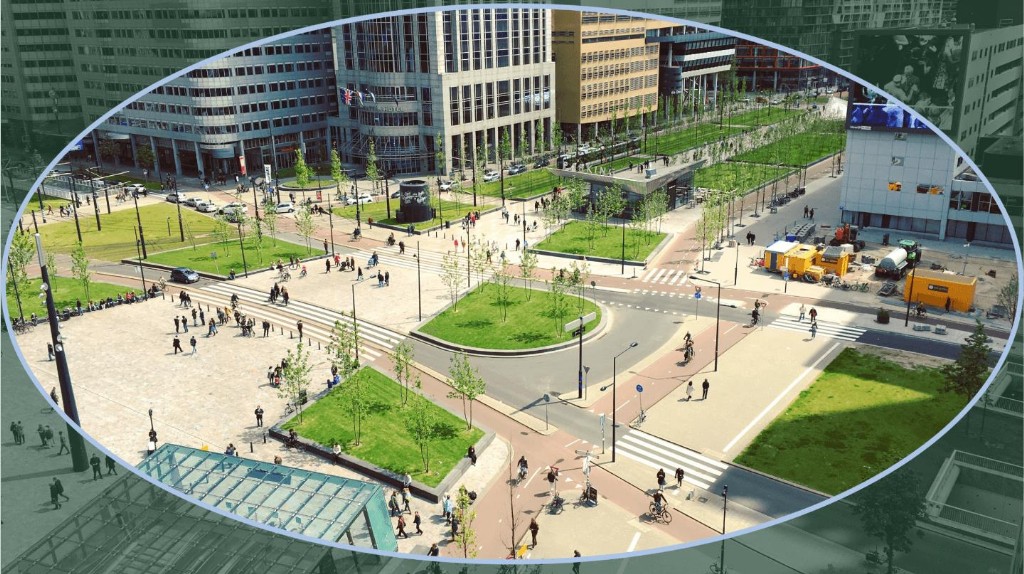 The theme of Driving Urban Change which was central to this years Mipim exhibition was fully taken on board by a major seminar about Brussels. This was in one of the conference areas used for international presentations in the Palais des Festivals, and was entitled Towards Inclusive Circular Urban Development. In this presentation, Brussels Region Secretary of State Pascal Smet started by saying that during these difficult times it is more important than ever to build cities in which people feel at home. He then added some wise words about the greening of cities and the place of nature within them. In the past, he pointed out, the procedure was to design a building on a plot of land and then look for where some green space could be included. Now, he said, the process has to be the other way round. It is also vital to look at transforming an old building before considering its demolition, and if demolition is the only option, the material should be recovered and re-used as far as possible.

A final point on the inclusion of nature is one that is not often expressed: nature plays a vital role in cities, but these cities still have to remain cities  they are not the countryside. And these cities  Brussels in this case  may well need further densification in some districts but a degree of de-densification in others. Cities are also places for social interaction, and in this respect the use of rooftops for activities such as cafes and social meeting places is important. Equally important to realise is that the overwhelming majority of an old city such as Brussels is made up of old, existing buildings. Renovating these is therefore crucial (especially in terms of insulation) but it has to be borne in mind that the majority of the inhabitants probably cant afford to do this on their own. Creating affordable spaces is what is required.

Following on from Pascal Smet, Brussels Bouwmeester Kristiaan Borret said that it is perhaps a good thing that the current uncertain times are causing us to make decisions. And for Brussels, architects and builders have a more complex job than in the past. Firstly because of two numbers  10,000 extra inhabitants annually and the need to contain global temperature increase to below 2°C. Along with this, buildings from the past were expected to last forever in their initial function, and this is no longer the case. So it has to be taken into account at the conception stage that in thirty years or so this new building may be called upon to do something else.

It is on this point that Kristiaan Borret said that we have to halt the merry-go-round of build  demolish  build Between pure demolition and total renovation, he went on, there are numerous possibilities: partial demolition only in order to allow more daylight in, for example. And this should be reflected in the building permits. He gave an example of the former stamp printing office in Brussels  partial demolition meant that the size of the new windows was not immediately known. So a building permit with flexibility on this point was granted. Renovation should also include the public areas, the parks, and in one case, for example, the material from the foundations of a demolished building were used to make a walkway in a park.

Kristiaan Borret echoed Pascal Smets point about the majority of buildings being old: we dont need just a few fine projects, he said, but we need to improve the general level of generic architecture with a systemic change.